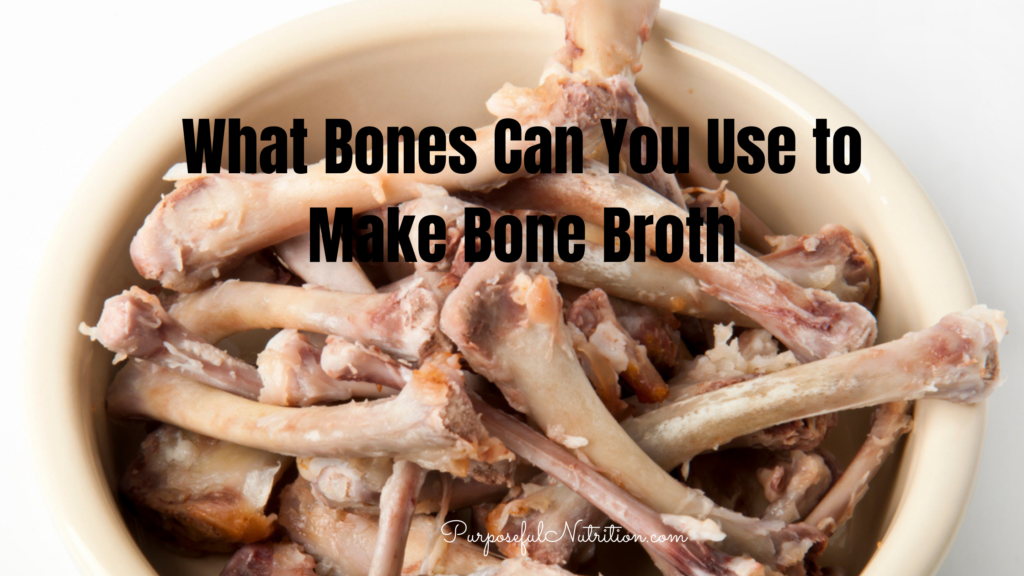 You’ve heard about bone broth, but you may be wondering what type of bones you can use to make a batch of broth. Bone broth can be made from just about any type of bone, but for best result, make sure you include some larger bones containing marrow and some knuckles and/or feet (chicken) to get plenty of collagen. Let’s look at some of the different types of bones you can use and where to find them.

Here’s something easy. Chicken bones are the perfect “gateway” bones to make your first batch of bone broth. Go buy a nice organic chicken. Roast it and enjoy the meat for dinner. Toss everything else into a large stock pot, cover with water and simmer at least 12 hours.

If you’re in a rush, you can even pick up a rotisserie chicken at the grocery store and use the bones when you’re done to make broth. It’s a great way to make sure you’re using up every little bit of the bird and you and up with some tasty broth.

If you have a farmer in your area that raises chickens for meat or eggs, ask what they do with the bones. You may just find a source of chicken bones free of charge. You can make broth from raw bones, but the flavor will be better if you roast them in the oven first.

Turkey works just as well as chicken. You may just want a larger pot. Before you toss that turkey carcass leftover from Thanksgiving or Christmas dinner, make a big batch of broth. Bone broth freezes really well. Make a big batch and run the broth through a strainer. Store it in containers and freeze until you’re ready to use it.

Bones can be boiled several times to make more batches of broth. Make one batch to freeze and then another one to use right away. Use less water the second time around to still get a flavorful broth.

Both beef and pork bones make for some amazing broth. They are a little bit harder to find though. Talk to the butcher at your local grocery store and ask him to save the bones for you. Sometimes you can even find inexpensive soup bones in the meat department.

Your local farmers market is another great place to source your bones. Talk to the farmers. Even if they don’t raise beef or pork themselves, they can get you in touch with someone who does.

Roast your bones before you make the broth for best results. Just spread them out on a baking dish and bake at 450 F for 20 to 25 minutes. Allow them to cool until they are comfortable and safe to handle. Put the bones in a large stock pot, add plenty of water and boil for at least 12 hours. Use a combination of marrow bones and knuckle bones to get the best broth with the most health benefits.

If you’re lucky enough to have a hunter in the family, ask him to save the bones for you. Or call up your local game processing business and ask about buying bones from deer. You treat them just like pork or beef bones.

The same goes for bison bones. If you have a bison farm in the area, it is worth making a call. While you’re there, pick up some ground bison too for some of the tastiest burgers you’ve ever had.

Fish bones sounds like something you might not really want to use.  I personally have not tried them, but I have a friend who has.  She told me it did not end up really being fishy, which surprised her.  According to Sally Fallon, in the cookbook, Nourishing Traditions, the best fish bones to cook are sole or turbot. Those may be very hard to find, so she also recommends snapper, rock fish and other non-oily fish.

It is important to cook not only the bones with fish, but also the heads, as they are rich in iodine and fat soluble vitamins.

What bones have you tried for broth?  Which are your favorites? Please comment below.