This is the first of a series I hope to have here at Purposeful Nutrition on stories of people who have been through the GAPS diet. Many of these folks are still on the GAPS diet but after 6 months to a year or longer they are seeing healing and changes. If you don’t know what the GAPS diet is,  you can read about it here.

Deb. B. is our 1st volunteer and she has been on the diet for almost 2 years. She chose a magnolia flower as the image to go with her post because she is a “warrior Mama” who has fought hard for healing and found it. As Deb says, “We GAPSters appear very fragile to the outside world, always battling illness of one kind of another, but one thing we are NOT short of is personal inner strength and determination.” Read her story below. 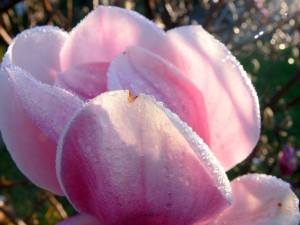 1. How long have you been on the GAPS  diet?  Officially, full GAPS since Thanksgiving 2011

2. What was going on that made you decide to pursue  the diet?

This is a very long answer. Believe it or not, this is the short version:

I have been sick all of my life. (I remember having brain fog, uncontrollable and very severe diarrhea in the school yard and other things as early as 1st grade)

My high school years are a blur because I was so exhausted, I slept most of my life away. When I wasn’t sleeping, I was like a zombie.

My senior year of school, after having to spend a few weeks with my sister because of illness, I decided something “had to be done” and I took charge of my own healing. Of course, I didn’t know really what that meant (there was no internet back then)  Despite actively trying to detox and do other alternative protocols along with conventional medicine, as I aged, I just kept getting sicker and sicker. I was considered quite the hippy – no perfumes, makeup, all “natural” stuff, spent as much time as I could barefoot out in nature, things like that. Despite my “natural” living, I just kept getting sicker and sicker.

By 2007, I could no longer function and had to retire early from my teaching job I loved (I was 54).

I was in agonizing pain 24/7 from head to toe, I had absolutely no stamina, could not hold an intelligent conversation, suffered from an endless list of allergies – food, air, you name it. I was tested for everything under the sun, was in the hospital for several weeks because I had chronic diarrhea for 9 months straight (ischemic colitis). On another occasion, I was hospitalized because of allergy related asthma/chronic lung infections and the inhaler they gave me just made everything worse. By 2007, I had a laundry list of foods and individual ingredients that I had identified as either sensitivities or allergies and I was diagnosed with “malabsorption” (I tested negative for celiac disease). I tried to work with two nutritionists who just did not understand why I could not eat the “healthy” food they were pushing. Doctors told me there was absolutely nothing they could do for me. I went on a gluten free diet, but there was absolutely no change. By that time I think I had narrowed down my “safe” foods to about 5 ingredients – potatoes, corn, lettuce, and broccoli. That is when I learned that potatoes and corn were not “safe” for me – they had been hidden all this time. In a panic, my husband and I wondered what in the heck I was going to eat. I was over 200 pounds, and basically homebound because I did not have enough energy to walk to the bathroom, much less anywhere else and my body was wracked with pain. Visits to the chiropractor, massage therapist, etc. were “nice” but they had no real effect. Years prior, I had had my dental fillings removed and I had braces put on my teeth by a wonderful cranial – sacral healer who was also a dentist in an effort to help my TMJ. Again, the cranial-sacral. work was “nice” and there was some healing
but…… when I realized potatoes and corn were a problem, I told myself I had to put all of what I had learned together to try to make sense of it… and started designing my own “treatment”  I got a binder and started writing everything down…. what detoxing methods were/were not working? We had removed almost everything from the house by that time and had identified all manner of chemicals. Even family members were removing things from their homes so I could visit. Then, I started in with the food… took EVERYTHING out of our pantry – even the foods my husband was eating and started breaking everything down. I was totally overwhelmed and wondered how this would ever work. That is when I discovered the Paleo community… Ok, I thought, this is all making sense…. there is a science behind all this… started eating paleo and started feeling better.. then BINGO… found GAPS….. I thought I had died and gone to heaven…. oh, my goodness, a
whole community full of people that understood and, there is a protocol already worked out. Thank you  Dr. NCM!!!! By this time, I could only sit at the kitchen counter for 15 minute intervals but I was determined to learn to cook (hubby had done all the major cooking in our family up until then)

I’m sorry this section is so disjointed and rambles… but to be honest, much of my life is a blur and there are huge gaps in my memory because of the serious brain fog. Seriously, my friends have told me sometimes they didn’t thing I “was all there” which they attributed to me taking large amounts of medications for all my illnesses and pain – but, the only medications I was taking was thyroid and migraine medication. Sometimes I did take things for muscle spasms, but that isn’t the medication they thought I was on…. And, they still don’t believe me to this day.

3. Did you start with Full  GAPS or Intro  first? I have not done Intro  I started with Full… very gradually building up my routines… I  absolutely did not know what I was doing in the kitchen.

4. What kind of progress or healing have you seen?   I do not feel or look like the same woman! Literally…. I put pictures side by side and you would not believe the difference. I have been told I look 15 years younger.

I went from a size 2X to a size 8/10, I am working 12 hours a week with energy to burn. I am in absolutely no pain! The bags under my eyes are gone. No evidence of digestive issues. I am off my thyroid medication. My brother recently asked me if I was taller. I told him that it is hard to stand up straight when you are in constant pain and so exhausted you can’t even stand up.

So here is the thing  –
Carpal Tunnel – Gone
TMJ – Gone
Fibromyalgia – Gone
Ridges in fingernails – Gone
Migraines – Gone
Digestive Issues – Gone
Medication for Thyroid – Gone (Still have thyroid nodules but I am working on this)
Reactions to milk – Gone
Insomnia – better (Would be much better if I was not so stressed by bipolar sister issues)
Oh – almost forgot – I no longer have to wear both my hearing aids – that is absolutely amazing!
no sign of my allergy related asthma
Constant Brain Fog – Gone, Gone, and Gone!

5. What other strategies have you implemented along  with GAPS?

Basically, the only thing I add to the basic GAPS protocol is Yoga and Thai Yoga because it is the most effective type of body work for my body. I also get massages whenever I can because I feel they aid detoxing. And I tweak the GAPS protocol to address my individual needs. For instance, I stay away from the foods that I still do not tolerate like coconut and since I am sensitive to MSG, I have to monitor the amount of bone broth I consume. When I can, I use the sauna. Other than that, I have abandoned everything else I had been doing over the years.

The only supplements I take are Vit. D and magnesium – for obvious reasons, I think

6. Are you off the GAPS  diet?   No, I like full GAPS. For me, it is a lifestyle. I had already  removed many things from my diet years ago like soy because of allergies and adopted many of the detoxing strategies ,etc. so it wasn’t a really huge mind shift. I really do not find it all that restrictive. It makes me feel happy because I know the food is safe. I really have no interest in adding grains of any kind to my diet. When things quiet down around here, I fully intend to do the Intro and then I fully intend to adopt a paleo/GAPS lifestyle.

7. Are there areas where you have not seen healing so far?  My body still struggles with toxicity – this has been since birth so I’m not certain that I will ever be at 100%. I still have to be careful of my physical environment and I am still allergic to pork, coconut, things like that. I use to view all this as a curse, but no I laughingly tell my husband that at least my body has the intelligence to let me know when I am around dangerous things.

8. What has been the hardest thing about following  the GAPS diet?  I would say learning to cook. I am very clumsy/messy in the kitchen and things do not come naturally to me. That being said, it does give me a great sense of satisfaction.

9. What has been the best thing about following the  GAPS diet?  I am living life for the first time in my life. Before, it was like walking into a storm – I had to lean in and push forward with every step – it was exhausting!

10. Do you have any advice for a person considering going on the GAPS diet?  Yes, – go slow, add in whatever components and routines you feel are your priorities for the moment and then keep moving as you are comfortable. Also, do what you can, when you can…. I have not yet met one person who follows the GAPS protocol that is able to do this 100% at any given moment. It is a marathon, not a sprint.

11.. Is there any you would like to add to the above comments.  Yes, I appreciate those of you who are blogging and doing things like this interview to help the community grow stronger and to communicate to others what this is all about.

It is not an understatement to say that GAPS has saved my life. Of course, the other things I did along the way, helped, like going to an Environmental Allergist, Cranial Sacral Therapy, Chiropractic, that sort of thing, but the GAPS protocol made me go “Ah, Hah!”