This story is near and dear to my heart because it is our family’s story and more specifically that of my lovely 16 year old daughter. After a year on GAPS and 2 years gluten free, she is thriving and healthy. ( For more on the GAPS diet see my page with links to all the articles I have written on it.) This was a girl with migraines, irritable bowel syndrome, asthma, and general malaise. It does a mama’s heart good to see the changes. The image here i have selected is a guinea pig because they are a favorite animal of my daughter and we have 4 of them in our home. 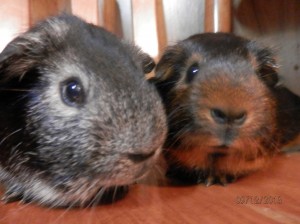 1. How long have you been on the GAPS diet?

2. What was going on that made you decide to pursue the diet?

Liana started having migraines at age 11. Around that same time she began to occasionally complain of stomach aches (although I found out later there was much she did not tell me about her irritable bowel syndrome.). About age 12 she began to develop asthma symptoms when she was very active or in a very hot room. She also was a very fearful person and had many nightmares and night terrors.

3. Did you start with Full GAPS or Intro first? How long have you been on each?

Liana actually went gluten free at age 14 and it did relieve her of the migraines. Her irritable bowel symptoms lessened but did not resolve completely. Then late in that same year she took all dairy and all grains out of her diet. 4 months later in April she started GAPS Intro. She was on that for about 2 months as she went through the stages and then went to Full GAPS. She did add in sweet potatoes and quinoa (mostly in sourdough form) in November of the same year and has had those since. She has add black beans once and a bit of white potato. Other than those she is still on a Full GAPS diet. She still does not tolerate dairy.

4. What kind of progress or healing have you seen?

We have seen a tremendous amount. The migraines are gone. The asthma only shows up on rare occasions when she runs really hard in the cold or something but maybe it is once or twice a year. And the irritable bowels syndrome is gone. Yes, she has to be careful about what she eats but she is not have diarrhea or gas or bloating or abdominal pain unless she accidently gets something she should not have, like dairy or guar gum or xantham gum or something like that. And then it runs it course briefly and she is fine again.

She also used to be a very fearful person and that is gone. She can still worry but that tremendous ruling fear is no longer part of her life.

5. What other strategies have you implemented along with GAPS? Why?

Nothing of any significance.

As I state earlier, not really. She is on the GAPS diet with the addition of sweet potatoes and quinoa, although most of the quinoa is in the form of sourdough. (She eats the sourdough quinoa bread and crackers that are up at this site.)

7. Are there areas where you have not seen healing so far?

It would be great to see her be able to handle some fermented dairy at least but that is not possible now. Some of what I have read leads me to believe she may be able to at some point, but who knows. That would be the only real point of non-healing.

8. What has been the hardest thing about following the GAPS diet?

The hardest thing is that we have to take food everywhere. There is really no eating out or eating at church dinners because you don’t know how things were prepared and what ingredients were used even to make homemade foods. And as a teenage girl it can be hard socially although she has handled it quite well most of the time. All her friends at church are quite gracious about it.

9. What has been the best thing about following the GAPS diet?

The best thing is watching my daughter thrive and seeing a healthy vibrant young woman who is conquering life. She would say the best thing is feeling good and having lots of energy and growing!! She is very excited about the extra inches she grew in this past year.

10. Do you have any advice for a person considering going on the GAPS diet?

There is hope apart from medications and covering up the problem. It is hard work but so worth it when you see the vibrant health that can come out of real changes to real food.

11.. Is there any you would like to add to the above comments?

A huge part of this is prayer and God granting us wisdom as we pursued healing. God is faithful and we have seen this.

I am also very grateful to folks who have gone the extra mile in this time to come up with foods that Liana could eat. My sister in law came up with quinoa sourdough recipes that Liana has really enjoyed. And some of the folks at our church have gone out of their way to make sure she can join in events and have good food that she can eat.

Update:  After 1 full year on the GAPs diet Liana began to add foods back in. She is now eating grains like buckwheat and oats, various beans including black beans and chickpeas, and is a bit relaxed about sugar (although she still avoids anything processed.)  She is identifying her diet as gluten free and dairy free. She continues to feel very good.